On Friday, James "Teddy" Herbert-Read will present our recent work on synchronized cicada calling at ISBE2014. This project started when Teddy's parents invited my family to stay at their house in Port Macquarie, about 4 hours drive north of Sydney. Teddy's parents are brilliant hosts, and each evening Lovisa (my wife), Teddy and myself would find ourselves sitting on their verandah, gin and tonic in hand, looking out on a beautiful sunset. Kangaroos hopped around on the lawn in front of the house.

Then the cicadas starting singing. At first they produced a low background hum, but as the evening went on the volume increased. It didn't increase steadily, but in waves. At first it was low, then it got louder and finally we could hardly hear ourselves speak. Suddenly it stopped again, and for a while the peace and tranquility was restored. But after about ten seconds or so it started up again. And on it went, loud chirping, followed by a pause and chirping again.

Lovisa, Teddy and I set off, gin and tonic in one hand iPhone in the other, to the edge of the bush and set up recording stations 100m apart. We left our phones in the forest and returned to enjoy dinner on the terrace. After dinner and night fall, we returned to look for our phones. After a bit of stumbling about with torches, and one close Kangaroo encounter for Teddy and my son Henry, we recovered them. We downloaded and looked at the sound files. The pattern was immediate and striking. First Lovisa's phone, from the top of the hill, had a peak in volume. A few seconds later, my phone from the middle of the hill peaked, and lastly Teddy's from the bottom of the hill peaked. It looked like a wave of sound was traveling down the hill.

Even for a mathematician like me, microphones placed out after a few evening drinks do not constitute an experiment. Luckily, Teddy volunteered to return to his parents and do the hard work, this time completely sober. He placed out microphones and measuring the waves of cicada sounds over different areas near his parents house. If you are in New York on Friday you can find out more. If not the video below gives a little taster. The size of the circles give the volume at different positions round the forest. Watch how the noise spreads from top to bottom.

Much of our analysis of this data will be inspired by earlier work on synchronized firefly flashing and the models by Steve Strogatz and others on coupled oscillators. You can also read more about these types of synchronization in chapter 6 of my book on Collective Animal Behavior. Teddy's talk is on  Friday at 3:20.
Posted by David Sumpter at 1:17 AM No comments:

In memory of Dave Broomhead 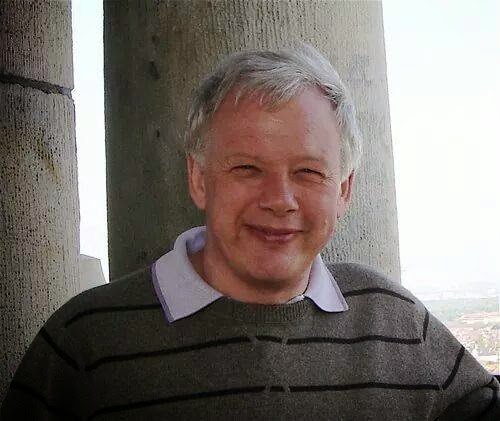 I found out yesterday that my PhD supervisor Dave Broomhead has died.

Dave was an amazing person and academic. For me, the thing that summed up Dave was his enormous faith in the goodness and ability of other people. His belief that everyone was doing their best may seem foreign to the competitive world of academia, where so many of us think our own work is the most important. But Dave's faith in others meant, not only that he was universally liked and respected by everyone he met, but that he could do research in a clear, methodological and honest way. I have many examples of his approach to life and academia, but those I give below are the ones that are most special to me.

When I started my PhD, I couldn't write. I had studied science and computing at school and University and never really got the hang of grammar or style. Dave took one look at the first draft of a paper I wrote and said "This isn't an article, its written like a computer program!". My feeling was that I was doing a PhD in maths, and writing was for journalists. Dave saw it differently. He set in place a Tuesday evening routine. We would go out and eat dinner together. He always paid. Then we would go back to his office. I would sit at his computer and he would lie flat on the floor behind me. He would ask me to read, line after line of the stuff I had written and make suggestions and corrections, not letting me move on until he was happy. The first two paragraphs of the 'Introduction' took about a month to write. I just reread these paragraphs now and see that they sum up much of my research over the next 10 years. Through these evening sessions, Dave taught me not only to write, but to organize my thoughts and solve problems.

It wasn't just his PhD students, to whom Dave gave time and space. He always listened carefully to anyone who talked to him: family, friend, academic, cleaner, or random person in the pub. I once asked him to chair a session at a meeting at the Newton Institute in Cambridge. In many ways, Dave was the worst possible moderator. He never interrupted the speaker, even when they were 10  or 15 minutes over time. By the end of the session we were running 40 minutes late. Dave had asked if there were any last questions for the final speaker. He looked around. No takers. Finally, after a long pause he said the speaker"…..OK, could you put up your 5th slide again….as you said I think there could be an interesting consequence if you took in to account…." and so it went on. When I asked about it afterwards he lightly reprimanded me for my impatience: "if people have come all this way to give a talk then we have to let them tell us everything that is on their mind, otherwise we'll never understand anything."

This faith in others pervaded his thinking about how academia should be run. He was opposed to all the forms of evaluations, rankings and assessment exercises that went on during his time in Manchester. His basic assumption was that anyone working in academia was doing it because they loved it as much as he did. If his colleagues failed to publish anything, it was because they hadn't yet found something worth telling other people about. Why publish a paper unless you really has something worthwhile to say? Better to wait until you had really solved the problem, and no point harassing those who hadn't got there yet.

His own research was grounded in a patient respect for what others had done combined with an extremely deep thinking of his own.  He invented a whole new field of radial basis neural networks, because he was carefully going through  and "spotted a simplification which the authors seemed to have missed". His influential work on time series analysis, took an abstract part of topology, in the form of Taken's embedding theory, and solved problems in detecting and understanding chaotic signals. Last time I saw him present his research he was using abstract algebra to solving computer communication timing problems. He used to joke that it didn't matter how 'pure' a mathematician thought their work was, he could take their work and make a useful application.

I last saw Dave three years ago, at home in Malvern with his wife Eleanor. I have seldom met two people with so much love and compassion for one another. I felt so much at home sitting in their house, talking to them both about their time as PhD students together in Oxford and their pride in their son Nathan. It is difficult for everyone when such an amazing person as Dave is lost, but his wonderful way of seeing life will never disappear.