One of the fantastic things about studying collective behaviour is the varying backgrounds of the researchers involved. I am a great believer that there is no unique way of looking at science. The more perspectives we have the more chance we have of understanding the essence of a problem. Many of Tuesday's talks at the Interaction networks and collective motion in swarms, flocks and crowds meeting really captured this diversity. They were focussed on the 'collective motion' problem of describing how fish and birds move in groups.

It started with Iain Couzin presenting his recent work on interaction networks in fish. His research group have been able to reconstruct the visual network of schools of fish, understanding who is following who. Iain, who was one of the leading people in developing the classic self-propelled particle like models of collective motion, suggested that the best way to understand information transfer in these groups is through the networks and not necessarily by building particle models. One of the ideas underlying this approach is to use machine learning to find models that best predict the patterns in the data. The next talk by Nicolas Perony also advocated this approach. He is going to use multiple sensors to track the details of what meerkats are doing. Machine learning and "reality mining" will be used to understand these vast quantities of collected data.

But there is still place left for 'traditional' approaches of understanding interactions between individuals. Daniel Schardosim Calovi’s talk was on trying to find the interaction rules for Tetra fish. These fish move about in a bursty way, one moving in front followed by another, and capturing these bursts poses new data analysis problems. Maksym Romenskyy was also trying to identify the statistical physics of fish interactions. He showed how this approach might shed new light on attraction/repulsion interactions.  Tsuyoshi Mizuguchi and Luca Giuggioli were both concerned with identifying how alignment patterns change between individuals.

I really enjoy seeing all these different approaches in action and it is hard to summarize all the new results in a blog post. But the major thing that struck me was how much more exciting work there is to be done. We have solved a lot of problems in collective motion over the last 5 years, but there are still many new challenges.

Posted by David Sumpter at 10:51 PM No comments:

The future of automation

Depending on your perspective, technological development has been saving us from drudgery, or destroying our livelihoods, for centuries. From the very first domestication of animals we’ve been finding ways to perform tasks with less human action since civilisation began.

Last week Dr. Michael Osborne from the University of Oxford gave a presentation at the Institute for Futures Studies showing his predictions about which of us will be losing our jobs in the century to come. Michael, as an expert in Machine Learning, is interested in which jobs will be automated as a result of increasing artificial intelligence in the Big Data era. He and his colleagues have been impressed at the rapid pace with which tasks that were seen as impossible for computers to perform, such as driving a car or translating accurately between different languages have become almost routine. 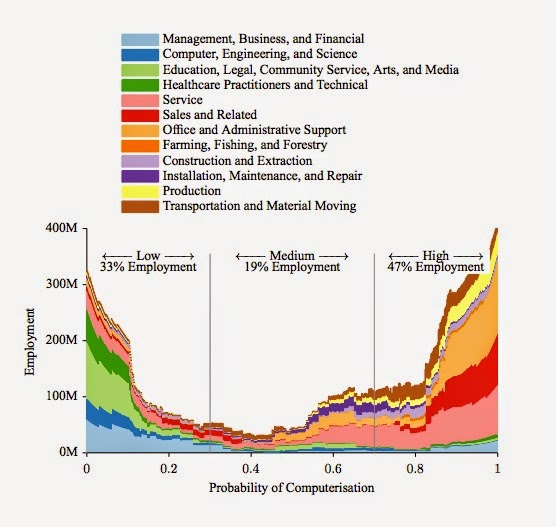 Machine Learning itself can be used to predict which tasks are ripe for automation. First they gathered data on the skills necessary to perform over 700 different jobs, such as social sensitivity, manual dexterity and creativity. A panel of experts was then asked to predict which of 70 specific jobs would be automatable in the near future. Using Gaussian process regression, Michael and his colleagues learned a relationship between the skills a job requires and the probability that a computer will be able to perform, and extrapolated this relationship to the 700 jobs the panel had not evaluated. Their results give us a view on which sectors of the economy will be most affected by the continued rise of artificial intelligence. The graph below shows, by sector, what proportion of jobs are at low, medium or high risk of being automated. In general, those jobs requiring the most necessary social interactions and/or high level creativity appear to be safest from the coming tide of job losses, but none of us can rest too easy!

However, we shouldn’t be too distressed at this imminent redundancy. As Michael pointed out for example, while technological progress has reduced the workforce in agriculture from almost 40% of employment in 1900 to around 2% today, the total unemployment rate has barely changed. Technology has allowed society to move human labour to more productive areas. The results of Michael’s analysis also show that it is generally lower paid, lower skilled jobs that will be destroyed, giving hope that people will be able to move into better employment, if society provides them with the necessary skills.

Nonetheless, Michael also showed examples of resistance to change, such as the guilds of Tudor England blocking the development of machines for making textiles in fear of their members livelihoods. The ever increasing rate of automation, and the subsequent need for people to continually adapt to new careers and find new skills presents society with a powerful challenge, that may require new social contracts, such as a guaranteed citizen’s income and much more investment in public education to solve. It will be exciting to see where this process takes us!

Posted by Richard Mann at 11:54 AM No comments:

The idea that we are only six introductions away from any other person on this planet is both beautiful and compelling. It has inspired research, provided inspiration to a film starring Will Smith and even launched a charity. According to Microsoft researchers it might also be true. They found that the  that the average path length connecting 180 million Messenger users in 2008 was 6.6. That was before Facebook and Twitter took off. By now the path length has probably shrunk further.

And it isn't just the internet that is shrinking the world. On Friday at the Future Institute, Kay Axhausen, showed that road travel times have halved over the last 50 years, that we dedicate up to 40% of our leisure time to visiting friends and meeting new people, and that these friends are spread over the entire world. In one study, Kay and his colleagues looked at the distance from Zurich residents and their friends. It isn't unusual anymore to have friends spread over 5 orders of magnitude.  Kay argues that this effect isn't limited to Europeans and North Americans, citing recent data from Concepcion, Chile where people have similar friend-distance distributions as Europe. There are apparently a few die-hards who refuse to join the global-village, but they are becoming increasingly rare (as well as isolated). 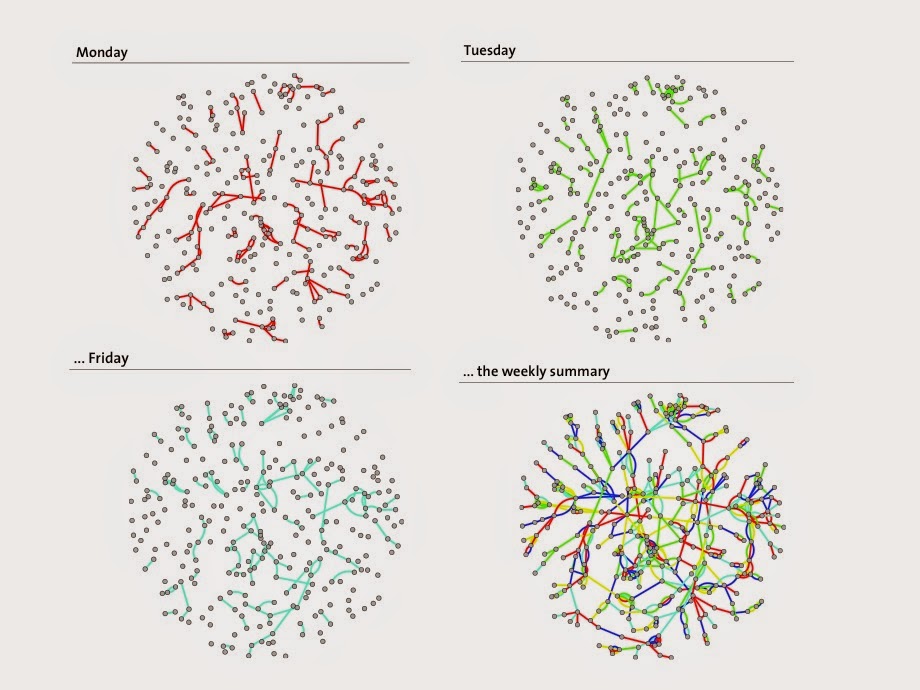 But the thing that struck me most was the time scale of the links. A recent paper in PNAS looked at bus trips in Singapore. Kay and colleagues drew a line between people if they travelled on the same bus on the same day. In the figure above the red lines show a shared bus trip on Monday, the greens are trips together on Tuesday and a cyan are trips on Wednesday. The last picture are all the weekday trips put together. By Friday, all the people are now connected through shared trips.

It turned out that even by Wednesday all Singapore bus travelers were connected. There are just three days of separation between bus travelers.

A bus trip isn't enough time to make friends. But it is enough time to check out what other people are wearing, what mobile they are using, what newspaper they are reading and even to overhear a few opions about the world. It is enough time for all sorts of interesting social information to spread. This result would have appealed to Stanley Milgram, whose small-world study first led to the 6-degrees idea. Cities fundamentally change the individual's social world in many different ways, not least in the time it takes for us to connect to each other.
Posted by David Sumpter at 11:44 AM No comments:

Twenty years ago the journalist John Horgan wrote a book called the ‘End of Science’. This must be one of the best popular science book ever written. Instead of the usual sycophantic interviews and hyped up description what scientists do, Horgan employed a more investigative style of journalism. He met with scientist after scientist and argued with them that all they were doing was either pointless tying up of loose ends or applied engineering. The big scientific questions were all already answered by Darwin, Einstein, Feynman etc.

It was this accusation that science is over, which Robert Laughlin addressed in his Ångström lecture in Uppsala. His hand drawn image shown on the right illustrated his main point. If you look in to the distance, like the character pointing towards the fantastic “frontier”, then it seems that all questions are answered. All the important things are answered by the beautiful view. On the other hand, if you ignore the view, like the other two characters in his drawing, and you instead look down at the detail of things nearby, then everything is a lot more difficult to comprehend. Science is just starting

Laughlin's presentation built on a point first made in Philip Anderson's seminal paper that 'more is different'. The idea is that at all levels of physical, chemical, biological and social organization, we cannot expect to use simple extrapolations of observations from the level of organization below to understand the level above. For example, the rigidity of ice isn't found in a description of a single water molecule. Similarly, we can’t claim to understand the internet just because we know how to program a computer. The combination of applications and content is more than the sum of the individual lines of code.

Laughlin goes one step further in this argument. He claims that "all laws of physics are discovered, and none are derived from first principles”. He argues that we can't sit down and reason our way to physical relationships from what we know already at the level below. Instead, we need to invent new “emergent” ways of describing systems, which combined with experiment allow us to understand things better. Each new law of emergent organisation must be understood in its own terms. This means that even if projects like string theory and grand-unification were to work, they do not provide much additional information about the rest of the Universe.

Some of Laughlin’s argument is common sense to anyone working outside physics (and to many people working inside physics too). No one would seriously claim that we can better understand animal biology using particle physics. But other parts of the argument require serious consideration by all scientists, not just physicists. For example, is genetics really relevant for understanding social behavior? Many biologists would argue that it is the most important tool we have, but maybe it requires us to step up over too many scales?

I think what Laughlin is trying to argue is that Science can’t be thought of as ending, because the so-called great scientific laws of Darwin, Newton etc. are ‘just’ examples of discoveries of useful regularities. While they are great discoveries, they are no more fundamental than finding out that stacking objects makes certain shapes of pyramid or that water freezes in the same way as other chemicals. They are no more fundamental than finding out that connecting up a load of computers results in a massive change in human society. Not every discovery is equal---Laughlin received a Nobel prize in 1998 for his “discovery of a new form of quantum fluid”---but no discovery is more fundamental than any another.
Posted by David Sumpter at 9:39 AM 3 comments: